Nicholas Criticos is head of store design for department store, David Jones, Australia. With retailers increasingly challenged by the ‘global bazaar’ customers now have access to, Nicholas is interested in exploring the future role of physical stores and how they can adapt in order to survive, and thrive, in the digital age. He promotes a lateral response, which involves creating meaningful experiences and connections with customers and immersion through effective design. He has specialised in retail design, creative direction and design leadership over the last 15 years. A trained architect, Nicholas leads a team of designers, planners and CAD specialists to deliver new store design concepts for future stores. He is currently working on the ‘store of the future’ for David Jones, as well as holding the role of creative lead for the Elizabeth Street store in Sydney, a $200 million renovation of a heritage-listed David Jones store. He is based in Melbourne. Nicholas was previously head of store Design for Woolworths South Africa where he was creative lead for the ‘store of the future’ Mall of Africa project. He also pioneered the retailer’s new food market format, the flagship of which was awarded the Grand Prize for Design in the Supermarket/Grocery category awarded by the Association for Retail Environments (ARE). He holds both a Bachelor of Architecture and Bachelor of Social Science from the University of KwaZulu-Natal, South Africa 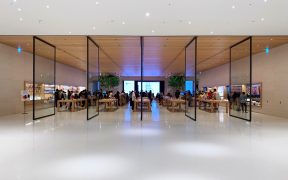